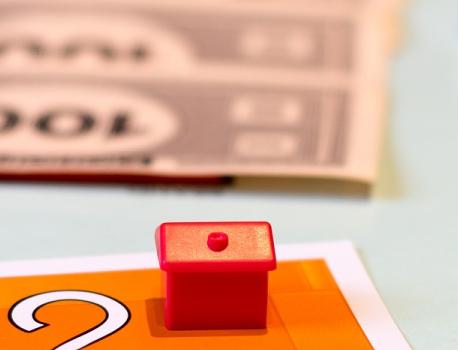 If for-sale signs in front yards were creatures, they would have the life span of fruit flies.

Among homes sold in March 2021, 83% had been on the market for less than a month. Homes sell fast because there arent enough to accommodate every household that wants to own one. The shortfall was 3.8 million units at the end of 2020, according to an April 2021 blog post by Sam Khater, chief economist for Freddie Mac.

How housing got here

To visualize this shortfall, picture the national real estate market as a game of musical chairs, with a twist: A chair is added to the circle each time 1 million homes are built, and a new player dances into the room each time 1 million households are formed due to population growth. From 2007 to 2020, the number of chairs grew from 130 to 141. But if Khaters math is right, about 145 chairs were needed to meet demand.

This is a result of homebuilders having been underproducing for multiple years -- not this year, but for the past 13 years, Lawrence Yun, chief economist for the National Association of Realtors, says.

The housing shortage has led to dashed hopes. Among would-be home buyers who had been searching for at least three months in early 2021, 45% hadnt bought a house because they continue to lose out in bidding wars, according to research by the National Association of Home Builders.

The result is rapidly rising house prices. The median price for an existing home rose 17.2% in the 12 months ending in March 2021, to 329,100, according to the NAR. At Marchs sales pace, only a 2.1-month supply of homes was available, near a record low.

Not only are for-sale signs short-lived, theyre also an endangered species.

Why there arent enough houses

The housing shortage sprang from numerous factors. Robert Dietz, chief economist for the NAHB, blames the shortfall on the five Ls:

That last item includes zoning and building codes, labor laws, requirements to set aside green spaces in developments, and things like exclusionary zoning that requires a minimum lot size, forcing buyers to buy more land than they otherwise would, Dietz says.

Dean Baker, senior economist for the Center for Economic Policy and Research, isnt convinced that zoning bears much of the blame. We didnt suddenly get much more restrictive in say 2010, 2011, 2012, than what we had in 2004, 2005, 2006, when we were building 2 million units a year, Baker says. So I dont think zoning explains the change. He believes that builders underbuilt because they became cautious after the 2008 housing crash.

Will the housing market crash again?

In 2005, I was a reporter, and I wondered whether we were in a housing bubble. Most housing economists told me we werent. Baker was the exception. He was so sure we were in a housing bubble that he sold his condominium in 2004 and rented a place, confident that he could use the proceeds of his condo sale to snag a bargain after prices fell. Less than three years after he sold the condo in the District of Columbia, prices there began falling.

If you fear that history will repeat, take this as comfort: Baker and I correctly thought we were in a housing bubble in 2005, but neither of us thinks were in a bubble this year.

We dont think home prices will crash, but they could get involved in a fender-bender. The 30-year mortgage has been below 3.5% since April 2020. Baker says: What happens when the mortgage rate goes to 4%, which is not high by any historic standard? Will prices fall? My guess is probably yes. It wouldnt be a crash, but there would be downward pressure on prices.

Prices are rising rapidly because demand exceeds supply, not because buyers are out to make a quick buck.

Todays housing landscape is different from the early years of the century. The housing bubble started in 2003, fueled by inadequate mortgage-lending standards and greed. Flippers were buying homes as short-term investments on the belief that prices would keep going up. But nowadays, regulators enforce stricter lending standards, and the homebuying mentality has changed. Prices are rising rapidly because demand exceeds supply, not because buyers are out to make a quick buck.

Who loses in a housing shortage?

These high housing costs have hit the millennial generation particularly hard, Freddie Macs Khater wrote in a February 2020 blog post. To overcome these cost barriers, some young adults have turned to shared living arrangements. Others have moved back home with parents. As a result, there are more than 400,000 missing households headed by 25- to 34-year-olds (households that would have formed except for higher housing costs).

Dietz, of the NAHB, says some economists speculated six or seven years ago that millennials werent interested in homeownership. That wasnt the case. People really confused a lack of means with a lack of wants, Dietz says. Millennials wanted homes in 2014 and 2015, but couldnt afford them because of sluggish wage growth and student loan debt.

Now those same millennials are further into their careers and earning more, and mortgage rates are historically low, but there arent enough homes to go around. It is a frustrating market, Dietz says.

Who gains from a housing shortage?

If the hot real estate market frustrates millennials, who does it satisfy? Homeowners may get warm feelings from tracking home values online. Sellers may feel contentment when collecting offers and anxiety when making offers on their next home.

Then there are landlords. In 2007, before the housing bust, there were just under 11 million single-family homes occupied by renters, according to the Census Bureau. In 2019, the latest data available, there were a little more than 15 million. Many of the 4.1 million additional single-family rental homes were houses bought by investors when prices plunged in the housing crash.

By renting out these houses instead of selling them, are landlords denying would-be buyers the pleasure of owning instead of renting?

On the one hand, theres certainly the argument that buyers of single-family homes, with intent to rent them out, take affordable housing stock out of the market that would otherwise be bought by a family, says Michael Neal, senior research associate for the Urban Institute. But at the same time, these buyers helped to stabilize the housing market in a situation in which demand largely had been placed on the sidelines.

What can be done?

Khater writes in an April 2021 blog post: Simply put, we must build more single-family entry-level housing to address this shortage, which has strong implications for the wealth, health and stability of American communities.

But how do we build more entry-level (in other words, relatively inexpensive) houses? Economists suggest relaxing zoning codes to give builders the flexibility to construct denser housing -- think smaller lot sizes and multistory, multiunit buildings. The Biden administration has proposed giving grants to local governments that revise zoning codes.

Neal suggests fixing the labor shortage by connecting community colleges with builders to develop skills and by rethinking immigration policy.

Theres a more direct solution to the markets failure to build enough houses: Have the federal government subsidize the construction of entry-level houses for sale to owner-occupants. This solution would result in more homes for millennials to buy. It also would let younger homeowners build wealth instead of transferring it to older landlords in the form of rent.

The Biden administration has asked Congress to allocate 20 billion in tax credits over five years to build or rehabilitate around 500,000 houses for lower-income home buyers. The plan is called the Neighborhood Homes Investment Act and the money would pay the difference between development costs and sale prices.

Half a million homes wouldnt eliminate the shortfall of 3.8 million dwellings, but it would be a start.